MLK Jr. had the courage to advocate for maladjustment in a society that didn’t make room for his ideas. Maybe we all need a little more maladjustment! 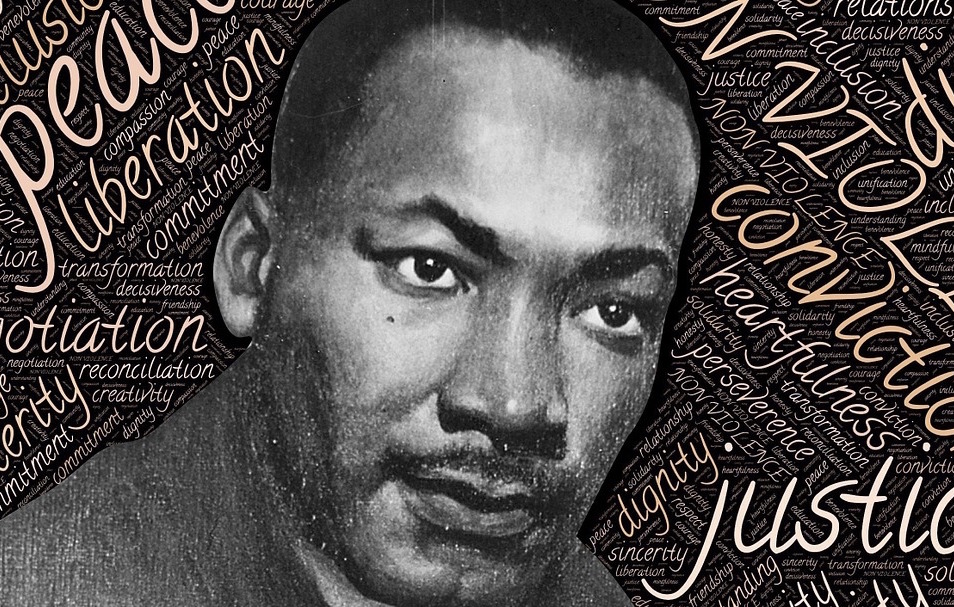 Dr. Martin Luther King Jr. was a beloved minister and activist in the American Civil Rights Movement, who won the Nobel Peace Prize for his work to end racial inequality by means of nonviolent resistance. He is considered to be one of the most influential American leaders, and his life and work continue to inspire millions of people in the United States and worldwide.

Dr. King’s legacy lies in his capacity to notice what is wrong AS WELL as what is right with our world; he didn’t only speak of the wrongdoings of his day, but also boldly and generously was able to appreciate where his fellow humans were supporting each other, believing in each other, and loving each other.

His March on Washington speech, commonly referred to as the I Have a Dream speech from August 28th, 1963, constitutes one of the defining moments in American history. In addition to the beautiful content of the words, it also relays an even more invaluable message about the strength of one man and his faith in the goodness of people to change the world as we know it. The speech was a huge achievement and was delivered live to quarter million civil rights supporters in Washington, D.C.

There was another speech that Dr. King gave, however, to a much smaller audience, that carried a message no less essential than his most famous address. On December 18, 1963, he spoke at Western Michigan University, and addressed the popular term “Maladjusted” that the field of psychology of his day had introduced:

“Modern psychology has a word that is probably used more than any other word in modern psychology. It is the word ‘maladjusted.’ This word is the ringing cry to modern child psychology. Certainly, we all want to avoid the maladjusted life. In order to have real adjustment within our personalities, we all want the well‐adjusted life in order to avoid neurosis, schizophrenic personalities. But I say to you, my friends, as I move to my conclusion, there are certain things in our nation and in the world, which I am proud to be maladjusted, and which I hope all men of good‐will will be maladjusted until the good societies realize. I say very honestly that I never intend to become adjusted to segregation and discrimination. I never intend to become adjusted to religious bigotry.”

He continues, “I’m about convinced now that there is need for a new organization in our world. The International Association for the Advancement of Creative Maladjustment—men and women who will be as maladjusted as the prophet Amos… As maladjusted as Abraham Lincoln who had the vision to see that this nation would not survive half-slave and half-free. As maladjusted as Thomas Jefferson who in the midst of an age amazingly adjusted to slavery would scratch across the pages of history words lifted to cosmic proportions, ‘We know these truths to be self-evident, that all men are created equal, that they are endowed by their creator certain unalienable rights’ that among these are “life, liberty, and the pursuit of happiness… Through such maladjustment, I believe that we will be able to emerge from the bleak and desolate midnight of man’s inhumanity to man into the bright and glittering daybreak of freedom and justice. My faith is that somehow this problem will be solved.”

Dr. King’s messages here is meant for all of us as we try to adjust to society and perhaps at times, do so at the expense of truths that are more important than being well-adjusted. Moreover, he tells us that it is the maladjusted, those who are able to notice what should not be blindly accepted, who eventually change the world. As he did.

Martin Luther King Jr. models for the rest of us a world view that prioritizes the ability to self-reflect on our lives and our world, and abandon our inertia and look at what is not fully right in the way that we think or love or make things happen. He tells us that he is “proud to be maladjusted” and thereupon, he gracefully becomes a leader and an ally for individuals that attempt to live in that way as well.

Perhaps we can each open an internal chapter of Dr. King’s proposed International Association for the Advancement of Creative Maladjustment within ourselves and thusly carry on his legacy. Let’s look at what has become too well-adjusted to an old script in our lives, that isn’t true for us anymore. Let’s decide to really look at where we are too well-adjusted and not just say slogans about political or social issues—we may surprise ourselves with the things we find to be deserving of a more focused attention in our environment. Let’s really look at the issues of the day and genuinely notice how they are being treated instead of carelessly assuming how things are done. We may be surprised at the allies we find or the courses of action that we discover.

In other words, let’s celebrate creative maladjustment the way that Dr. King intended!

Eva received her Psy.D. degree from the California Institute of Integral Studies. She embraces considerations from mostly a relational orientation, along with implementation of psychodynamic, Time-Limited Dynamic Therapy, and behavioral concepts. Eva is specifically interested in utilizing her clients’ stories of transitional periods and their perception of self (their personal myths) – as a vehicle to discover new possibilities for thought and action.