When it’s gray outside, we can connect to our weather “inside.” 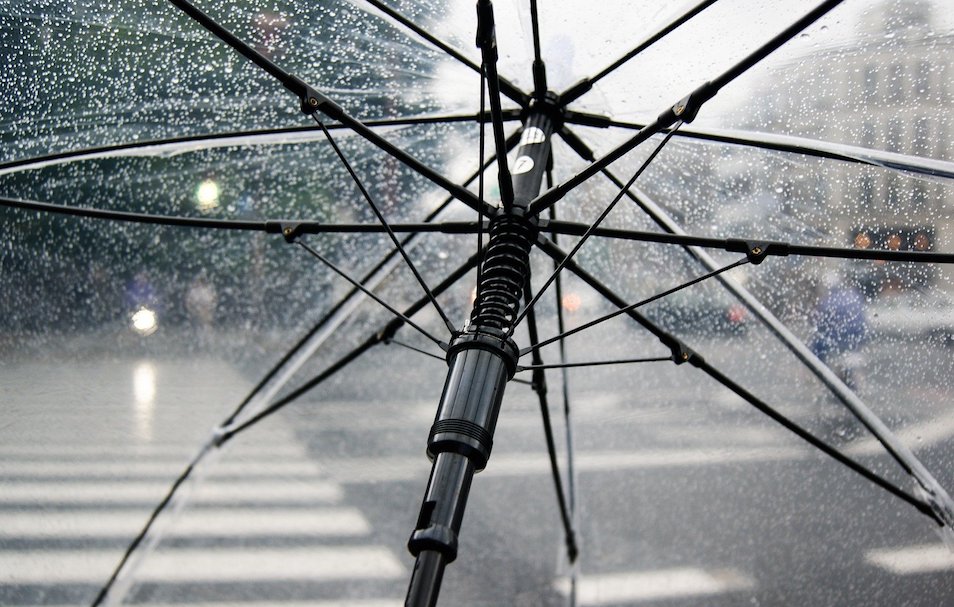 It’s a cloudy day today, and according to the weather charts, a cloudy day in LA is by far the exception. Out of all the days in the year, 292 have at least partial sunshine, 186 of those days with full sunshine. The national average of days with some sunshine per year comes in at 205. A Great Lakes city, such as Cleveland, Ohio, banks a meager 168 days with at least some sunshine. There are only about 33 days per year in LA with some precipitation, this against a national average of 106 days. In Cleveland, it’s 148 days.

Everything looks altered when it’s not doused in sunshine

I get it. That’s what people like about Southern California, but there’s something appealing about days like today. Misty days are even better, and I like a good, solid rain fall best of all. There’s something about imperfect weather in LA that’s kind of… different. Everything looks altered when it’s not doused in sunshine: palm trees slightly muted, tropical colors less vivid.

For me, personally, cloudy and rainy days are a little nostalgic. If you haven’t guessed it, I’m from the Midwest – Cleveland specifically – and don’t get me wrong. When I say the weather makes me nostalgic, that’s not to say that I exactly miss it. It simply means that there are certain elements of the bad weather that I find appealing.

Consider rainstorms, not the kind in LA where once or twice a year the cold rain comes down hard enough to flood the streets, but the Midwest kind of rain, the warm rain, the rain you can see stretched off in the distance, the rain that cascades from massive thunderheads that rip through the plains, the rain you can smell an hour or two before it hits, the rain that leaves you soaked to the core after a twenty foot sprint to the car. That kind of rain, the Midwest kind, makes me nostalgic. I have fond memories of stepping outside onto my porch when the worst weather approached. I remember looking out and attempting to distinguish how quickly the clouds were moving. I used to judge the distance of the storm by calculating the time between when I saw the lightning and heard the thunder. I’d stand outside for the entirety of the storm, just to watch the lightning rip, the thunder roar, and the rain press down on the wind-bent trees.

Or, again, think about snow, a Midwest snow, a blizzard. Full confession, I don’t like snow very much, and I especially don’t enjoy the cold that comes with it. But when I had nothing to do, say, on a lazy weekend, and it would snow all night and all day, sometimes accumulating over three feet, I remember layering up – down jacket, gloves, hat – and walking out into it. I would do so late at night, out onto the urban-suburban streets of Cleveland where the streetlights picked up the flight of each swirling snowflake (I’ve learned only recently that snowflakes actually mute sound waves, thereby creating a unique “blizzard silence”) and immerse myself in the total silent whiteout.

Like rainstorms and blizzards, bad feelings can flood us in the short-term

As every Southern Californian knows, even a light rain goes a long way in clearing the air. It can eliminate the dirt and other pollutants from the air so that what you couldn’t see the day before appears as if through a magnifying glass. The same happens after a Midwest rainstorm. In the short-term, the air becomes spectacularly fresh and clean. A deep breath of post-rain air seems particularly cleansing. In the long-term, the storms produce a lush, deep shade of green.

After a proper blizzard, there is a unique beauty to the untouched whiteness of snow before the snowplows spring into action. There is something sublime about snow that piles up to the point where it’s difficult to distinguish sidewalk from yard, street from tree lawn. I remember taking pleasure as the first to walk through the feet-tall snowfall.

Admittedly, bad Midwest weather comes at a price. A rainstorm could flood the garage, perhaps, or it might cause leakage in the basement. A blizzard made it really difficult to drive, for example, or to do basic tasks such as walking the dog. But something about them I miss, something about the unique experience of being in them, of existing in them, of surviving them, in a way, that seemed to make my days and weeks more full, both in the short-term and in the long-term.

Like rainstorms and blizzards, bad feelings can flood us in the short-term, or they can cause practical difficulties in day-to-day living. In the long-term, however, bad feelings can, well, clear the air. They can offer us a wellspring of growth. Bad feelings can, moreover, lead to beautiful, transformed perspectives of our inner psychological lives, but only if we experience them fully, only if we immerse ourselves in them.

And so, next time it’s cloudy or rainy here in the City of Angels and you feel like you want the sunshine back, consider that there are some parts of you that need a day like this. Allow that gray to elicit some gray feelings that you might have inside of you and need to be felt. You might only need five minutes with them, or it might lead you to take certain action around them or express them in a creative way. You might find that you can enjoy the raindrops more fully following such an experience of a match between what is inside of you and what is outside the window.