Beloved, busy and joyful Maestro Herbert Blomstedt is an inspiration to all of us on finding and creating meaning and passion in later life. 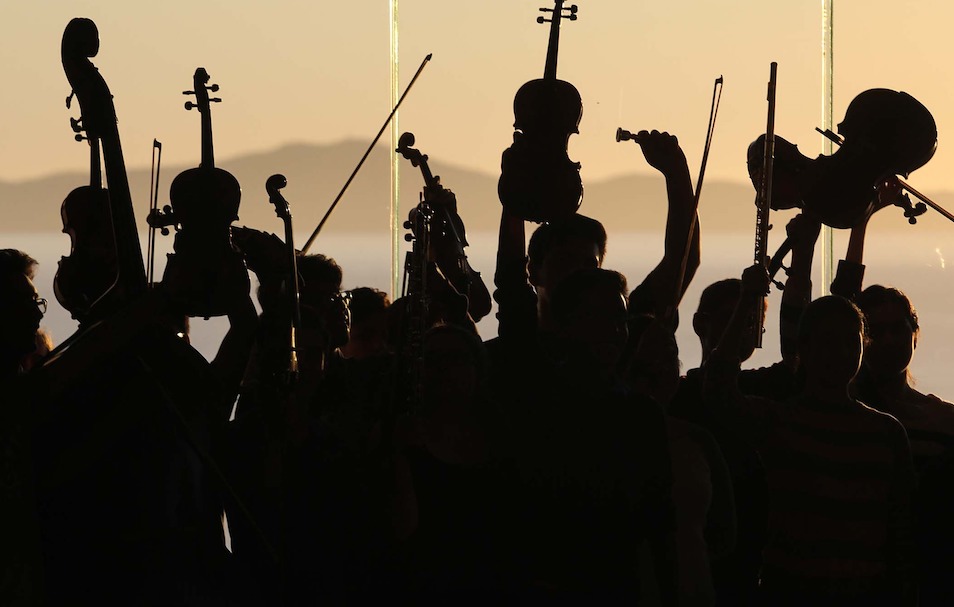 Yesterday afternoon, I had the pleasure of hearing Maestro Herbert Blomstedt conduct symphonies by Beethoven and by Sibelius at the Walt Disney Concert Hall.   The music was inspiring, soulful, and remarkable in that the conductor, who celebrated his 90th birthday in July 2017, is scheduled to conduct over 90 concerts this year.  While Blomstedt initially struggled to step onto the conductor’s deck, once there he soared for the next two hours as he passionately conducted while standing, with nary a score in sight.  After the privilege of listening to Blomstedt’s beautiful music, I was drawn to learn more about his ability to throw himself into life in such a grand manner.  Whereas Blomstedt’s physical longevity can be attributed to genetics or lifestyle, what interested me was his ability to continue leading a life full of meaning and passion.  As I searched to learn more about this extraordinary man, I found two elements in his life that coincide with my previous research findings on how to integrate and maintain a sense of fulfillment and joy in later life: spirituality and human relationships.

Those who maintain meaningful lives in later life often draw sustenance from a spiritual connection, whether it be from organized religion or through activities that are infused with spirituality.  For Blomstedt, this spiritual connection seems to be expressed through his religious practices.  In a July 2017 interview with Spectrum Magazine, the interviewer depicts the real oasis in Blomstedt’s life as the Sabbath. “Then the scores are set aside, and all his orchestra colleagues know that he wants to be in peace. He will be looking forward to visiting the nearest Adventist church wherever he is conducting, and where he is often given the privilege of preaching.”1  For Blomstedt, “the Sabbath flows like a vibrant rhythm of life through his career.”1

While Blomstedt’s spiritual path runs through his faith, it is important for others to know that many roads lead to Rome.  Spirituality can be found through all activities that are infused with a quality that takes people out of their mundane day-to-day existence and allows for something bigger to develop that reaches beyond themselves.  For some, this might be nature or creative endeavors; for others, yoga or meditation.  The paths are endless but the need is great.

Human relationships are a fundamental building block in the pursuit of meaning-making in later life.  Although Blomstedt’s wife is no longer living and he has outlived many of his friends, he still makes time to connect with people on an intimate level.  When speaking about his musical friends, he says, “When I stand before these amazing orchestras, it’s like coming home to my family, my musical family.  I work with them every year and they are wonderful musicians who give their very best.”1  In addition to his musical family, Blomstedt speaks lovingly of his beloved family in Bergslagen. The family farm there is beautifully situated by a lake in the forest.  “Blomstedt’s youngest daughter, Kristina, and her family live in the house, so he is well taken care of when he gets there.  He is able to spend three or four weeks there each summer, enjoying picking berries and mushrooms in the woods.”[1]

Blomstedt hits all the right notes in finding meaning in later life.  His life, ensconced in spirituality and human connection, allows him to thrive and share his art with us all.  His path sheds a light on how to engage with life, even in our twilight years.

I’m Marcia Nimmer, one of the therapists you could see at Wright Institute Los Angeles where we offer Affordable Therapy for Everyday People!

Marcia is a doctoral candidate at Pacifica Graduate Institute. Her research and writing has focussed upon finding meaning in the second half of life. She is drawn to helping individuals continue to grow and develop throughout the lifespan. Marcia sees post-midlife as time of great potential and wants to help individuals explore and find their full potential and whole selves.